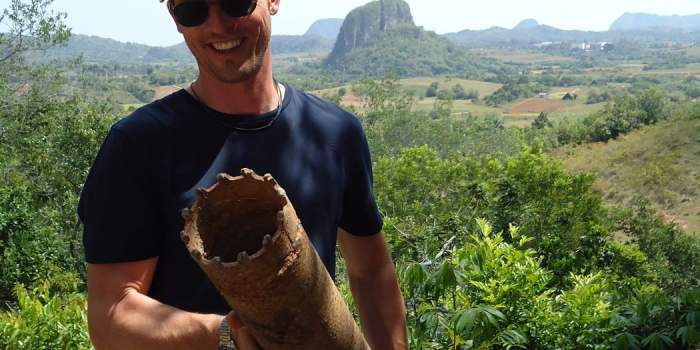 With the volunteering phase of their trip now complete we caught up with CCGI Operations Manager, Rupert Garner to see what he and his girlfriend Dr Laura Corbett have been up to.

‘I met up with Laura in the Bocas Del Toro region of Panama where she had been working with Floating Doctors for five weeks,’ Rupert explained.

Floating Doctors offers vital healthcare to the indigenous Ngobe tribe in the west of Panama.  Rupert was fortunate to be able to join them for one of their ‘multiday’ clinics. These involve going to a community for four days and living in the community whilst providing daily healthcare clinics.  ‘A team of 20 volunteers and floating doctors staff comprising of  nurses, doctors, a midwife, dentists, translators and medical students travelled to the Ngobe tribal community of Pueblo Nuevo by a combination of boat, minibus and walking with all their kit’.

‘We awoke on the first morning to people already queuing at the gate to the clinic,’ explained Rupert.  ‘Given that we weren’t due to open for another hour this hinted at what was to come and the remainder of the day was a blur as we saw over  150 patients – who I was responsible for clerking in at the reception desk’ .  This continued on the second day of the clinic and in total 302 people were seen in two days, this was the largest multi day clinic Laura had seen during her time with Floating Doctors.

‘In the evenings we packed away the clinic and strung up our hammocks in the large open air community building in the centre of the village – which they call a ‘Rancho’.  The first night of sleeping in hammocks was a little uncomfortable but after that we were all so tried we slept really well!’ explains Rupert.

‘After two exhausting days of clinic and two days of travel it was nice to get back to Floating Doctors head quarters to have a shower, continued Rupert.  ‘However the very next day we were in Isla Colon town on Bocas Del Toro.  Here there is the Assilo which is a Panamanian nursing home for some of the most vulnerable old people in the community.’

So with their time at Floating Doctors complete Laura and Rupert headed off to travel to a few other countries and enjoy the treats they had to offer.  This included a trip to the Valles de Vinales in Cuba where Rupert made a familiar discovery . He explains:

‘So there we were at the top of a large limestone hill having horse trekked all morning to reach the lookout point.  Laura was just tucking into a Coco Loco or Crazy Coconut which is a coconut topped up with a little of the finest Cuban run and a spoonful of honey when I noticed lurking behind a chicken hut a very familiar tool…a drill bit! I chatted to the locals and it appears that the bit was used for drilling water wells with a technique that employs both cable percussion and rotary drilling… however they do it all by hand!  I’m thinking of bringing it back to the UK to save on fuel costs?’

So it shows you are never that far from home!  They are travelling to a few more countries and then will be returning to the UK at the end of May.